It was tight, and a few things here and there got left behind, but Dad and I managed to get pretty much everything packed into the trailer, truck bed, and extended cab.

Huge thanks to Russ and Robert for coming over Thursday night and Friday morning to help Dad and me load the truck. It would have been a much longer and more difficult process if not for the help provided by these BSG’s (big strong guys).

It would normally be difficult to write about highlights of a dash down I5, but we had some really extraordinary weather.

First, while we were still in the process of packing up the truck at my condo, it started to snow. In San Jose. Mid March. It was very weird feeling the pavement crunch as I walked around on it.

We finally left the condo at around 12:15pm. First stop was Dave’s parent’s house to drop off some sleds (not much in demand in Texas). On the way there, we encountered heavy traffic on 280 with slush piled up on the sides of the road! People were driving very carefully at least.

Other than the frustration of watching cars flash past you (55 mph CA trailer speed limit), the ride down 101 to 152 and 5 was uneventful. There was no snow in evidence on 152, so we hoped that we’d left that phenomenon behind.

I was driving when we saw a *wall of dark clouds* ahead near Buttonwillow on I5. We started getting some rain, then snow, then hail. Dad thinks that a weatherman might exaggerate the size of the hailstones to “golf ball” size. Really, they were more like gumballs. Later dad changed his story, deciding they were more like blueberries. You can see that the hood of the truck is covered with snow in this pic taken through the windscreen. 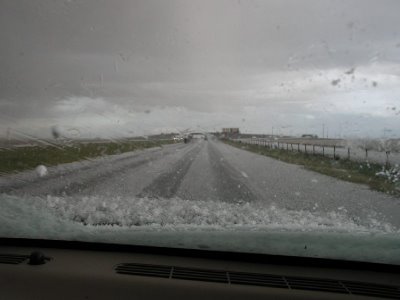 And a look behind, at snow on the green trunk and on the seat of the BMW. 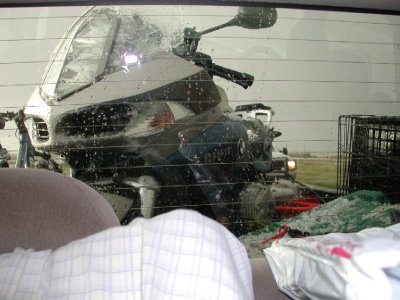 After that very non-CA-Central Valley experience, Dad got on the computer and started surfing weather and road conditions sites to find out what to expect ahead. He found calls for 30 degree temperatures and 3-5” snow accumulation forecast for one of the towns up on the Grapevine. With it starting to get dark, we wanted to get over that as fast as possible.

It was snowing up on Tejon Pass, the “Grapevine”, but nothing really bad. The roads were staying free of ice.

After coming down the pass into the LA area, we were surprised to find very little traffic on the remainder of our drive to our reserved hotel room in San Bernadino.

Dinner was at a seafood restaurant where we got a free shrimp cocktail because our order was taking longer than expected. The shrimp was good, but the bunnies really enjoyed the spring mix lettuce that it was resting on. Our waiter probably thought it a little strange that we wanted a “doggie bag” for the garnish.

This entry was posted in No Motorcycle Content. Bookmark the permalink.