Saturday morning was a whirlwind of activity trying to get four women out of bed and to the track by 7am. With dusty conditions in mind, none of us took showers before getting into our gear and guzzling mochas from the café in the Sahara’s lobby.

The shuttle over to the dirt course was a little late, so we hung out at the track rider’s meeting until it arrived. We smiled to hear the “Dirt? Whoa, they’re brave.” comments as we strutted from the meeting area to the shuttle. 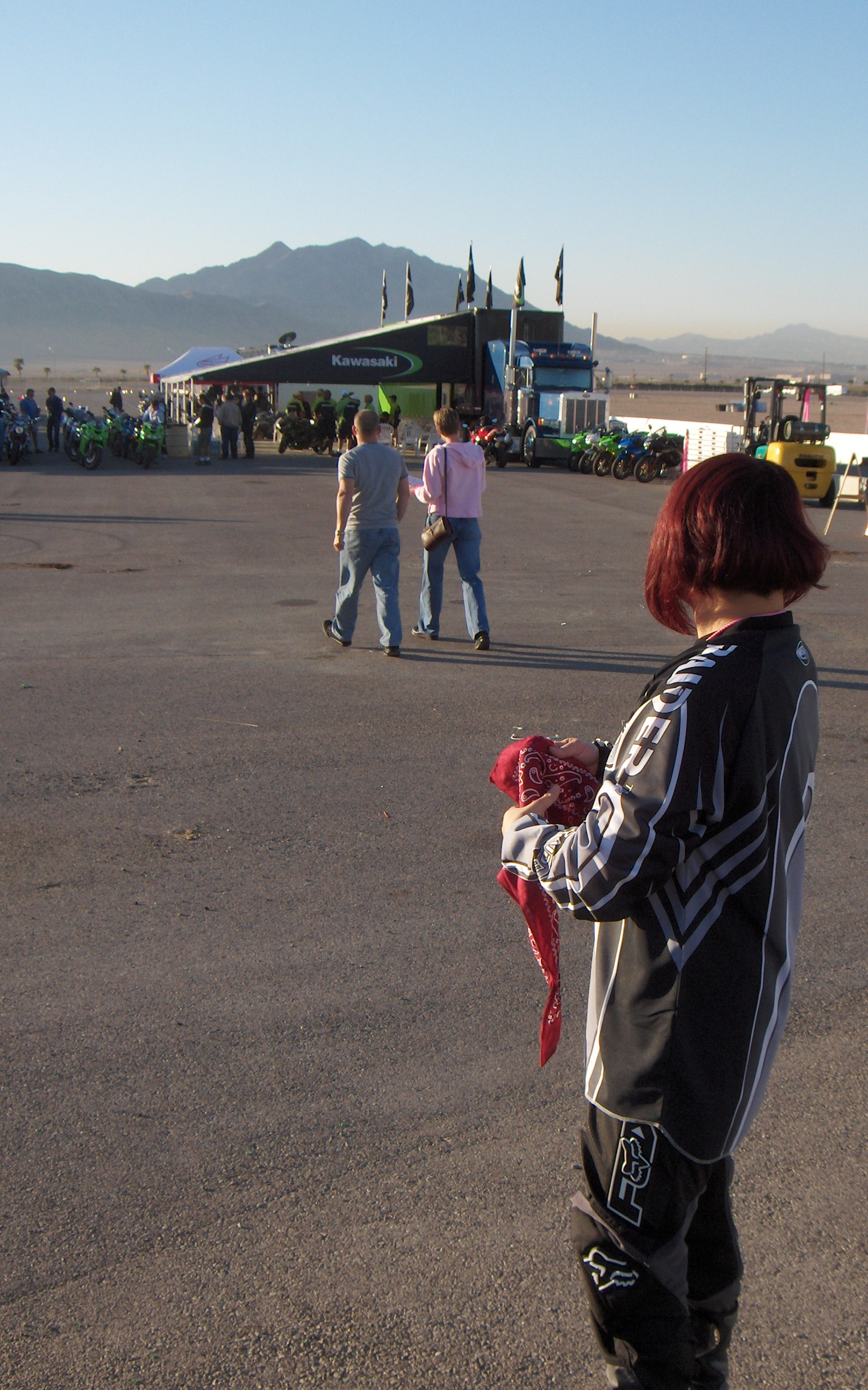 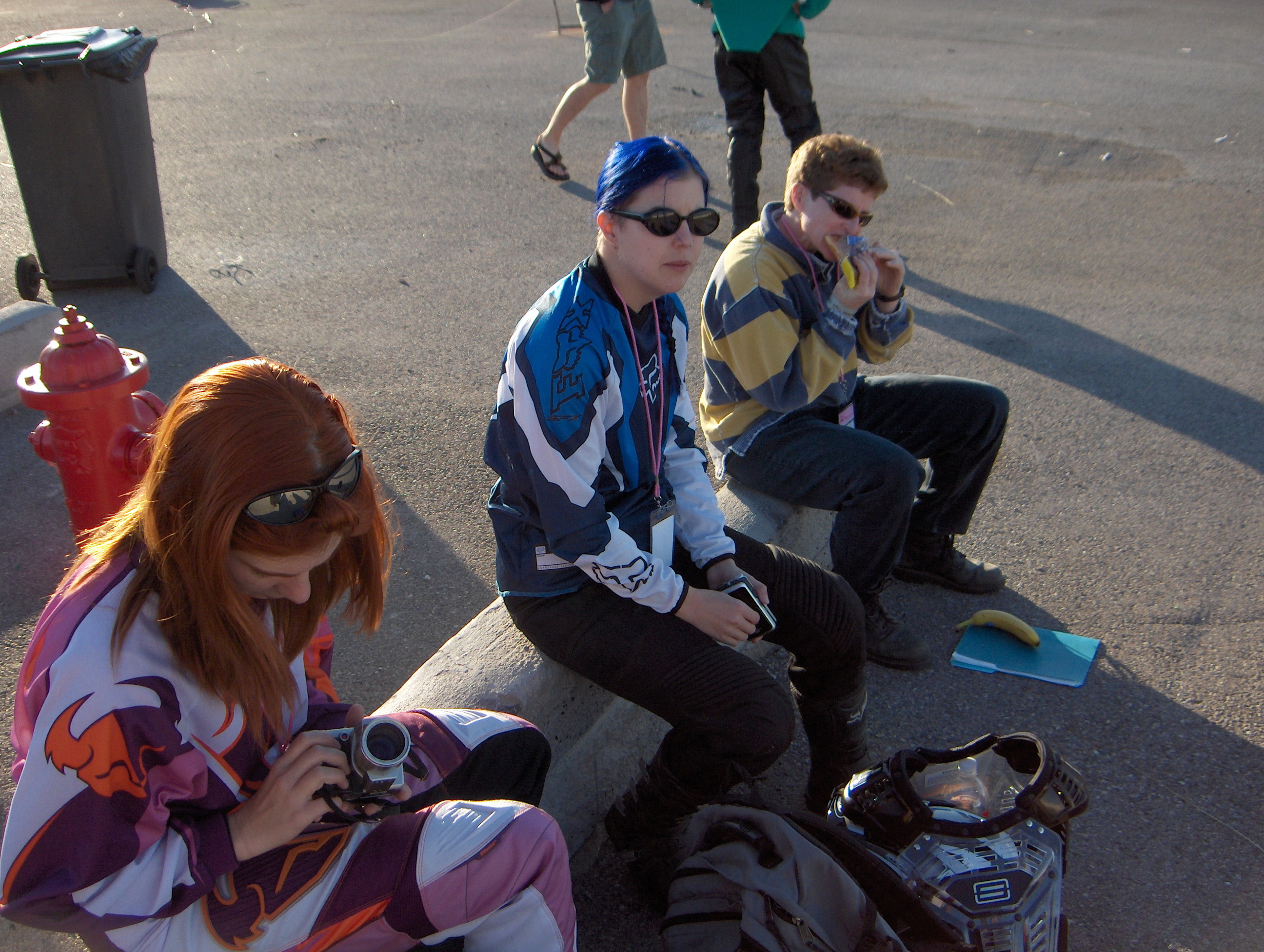 Waiting for the festivities to start

Kawasaki had a huge trailer and awning set up at the motocross track with several bright green dirt bikes and dual sports of various sizes lined up in front. We sat down for introductions after everyone had been outfitted with dirt bike helmets, goggles, and gloves. 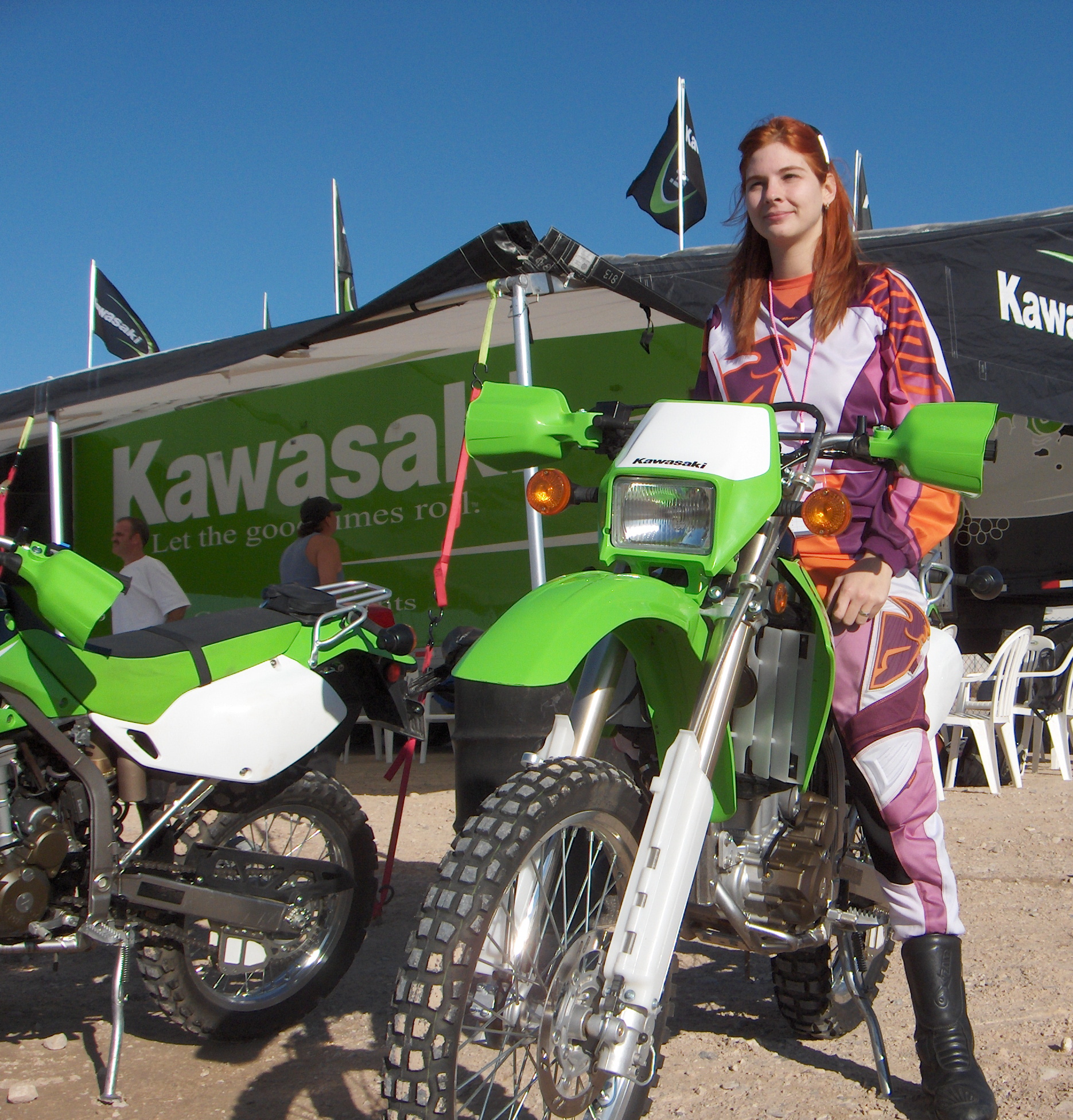 Kristina checking out the Kawis 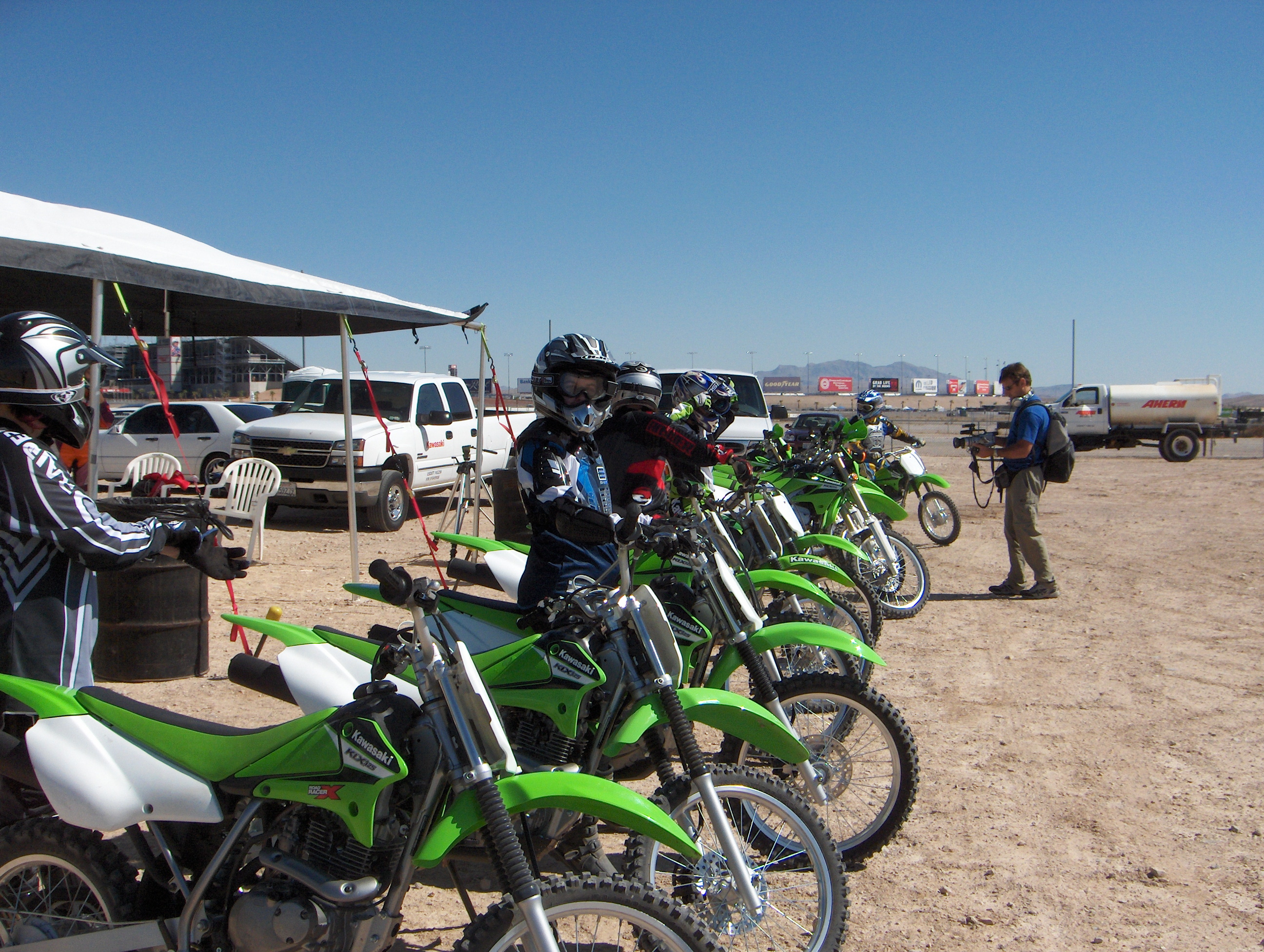 I struggled to keep my jaw from dropping as the coaches rattled off their decades riding and competitions won.

With six students in the Saturday morning MSF dirt class, the student:teacher ratio was 1:1. We split off into two groups. With no dirt bike experience, I went for the more beginner of the two.

Over the next few hours we went through several exercises from the MSF Dirt playbook.

First we just rode around the laid out arena to get a feel for the bikes, practicing starting and stopping. With a baseline for our skill levels, the coaches taught body positioning and braking.

Counterbalancing was next (the act of pushing the bike into the turn while keeping weight on top (or to the outside). I was quickly amazed at my ability to actually trust tires on dirt, leaning my lightweight 125cc over far more than I ever remember leaning my R1200ST.

After learning about body positioning while standing on the pegs, we rode in impossibly tight circles. I think I finally understand why experienced dirt riders laugh at newbies who think the DMV circles are too tight to ride around.

Standing on the pegs was effective for getting around tight turns, but I tired quickly of the unaccustomed position. I was adequate at slaloming through tightly placed cones, but when the cones were offset too far to take sitting, I had trouble keeping off my seat long enough to get through the course.

The best part of the class came at the end, when the coaches led us on a little 15 minute trail ride through the Motocross track. We rode through mud, sand, gravel, washboard, up steep hills, down *cliffs*, and generally managed to have a blast. The brief ride helped me mentally pull together all that I had learned during the class.

I think that my street experience helped get me through parts of the class. I already knew about turning my head to LOOK where I want to go from street riding. That was very important when going around the tight circle. My street-bike learned reflex of letting my bent elbows flex as shock absorbers and staying loose to go over obstacles helped make the washboard area fun.

One moment that sticks in my mind was going through a muddy area. The coach rode her bike to the side of visible mud. I followed her, but freaked when my rear wheel squirmed around. On the next lap of the course, I was ready for the temporary but harmless squirming and had no problems. After the ride, the coach who was sweeping commented that she’d noticed my improvement in that area.

Trail Ride on the Motocross track

I did a double-take during a water break when what looked like one of the official track photographers addressed me by name. Jason (Slingshot) from Sport-Touring.net had arrived at the track with his HUGE camera while we were doing our exercises. I had met him at the National in West Virginia last June.

Now that I’ve got some dirt riding under my belt, I’m eager to get some more seat time. I’m sure that the more I ride in dirt, the more comfortable I’ll feel in loose situations on my street-bike. Hmmm – maybe the CB350 needs to acquire some knobbies?

We rode the shuttle back to the paved track for lunch and then loitered in the pit area for an hour before heading back to the hotel. 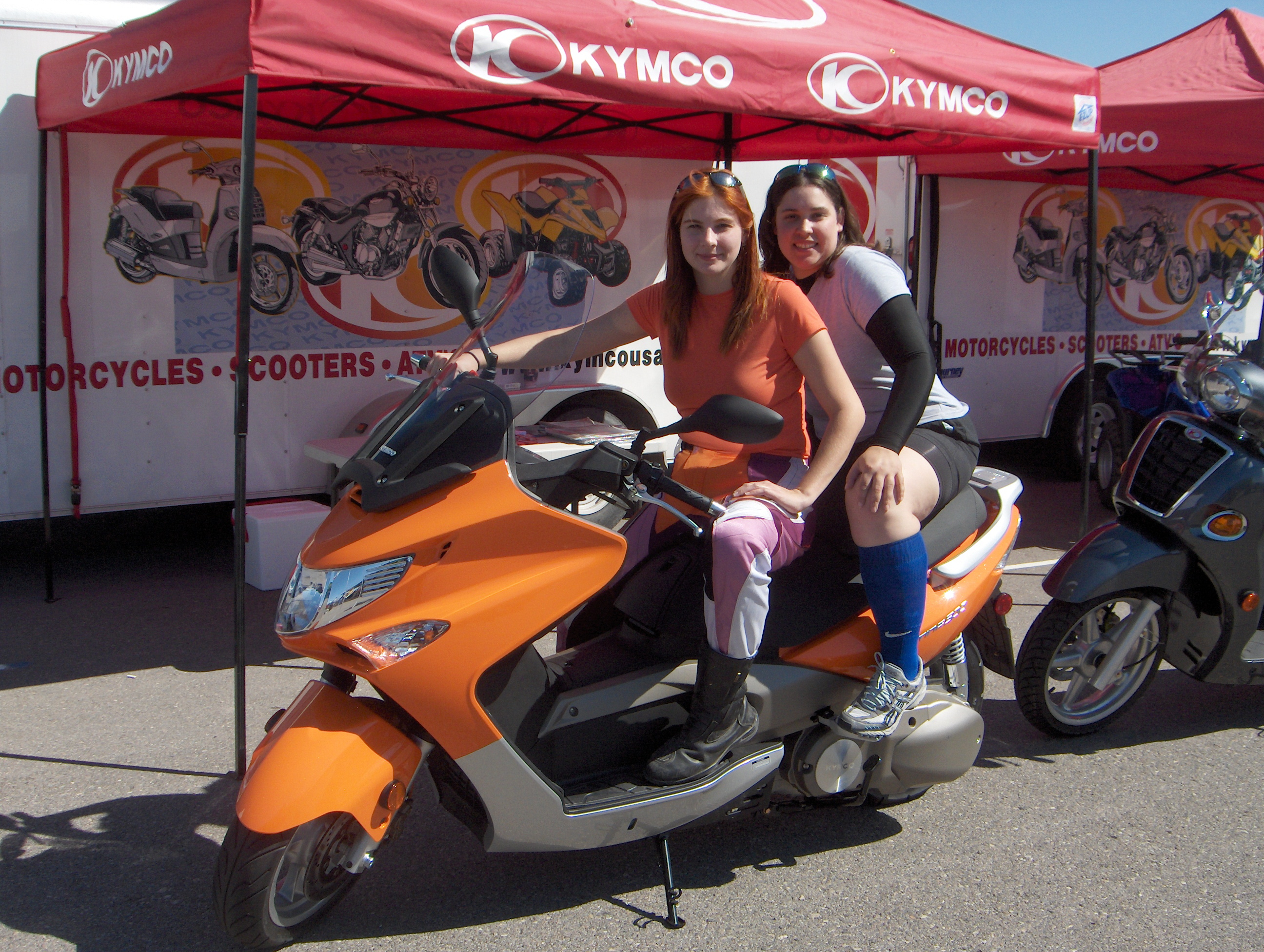 Kristina and I 2-up on a Kymco

Carolyn, Kristina, and I decided to walk downstairs for Daiquiris on the pool-deck before showering. We spent a few minutes in the huge spa and relaxed on lounge chairs.

After time spent primping for the Femmoto Banquet, Carolyn convinced me to join her at the blackjack tables. I’ve never gambled before, but decided that I could afford to budget $50 for a few hours of entertainment at the $5 tables. I probably drove the dealer batty with my constant questions about which actions to take.

The banquet included a catered dinner and women’s gear fashion show by Hein Gericke, Icon, and Ducati. The hall was freezing, so we drank lots of coffee attempting to keep warm. 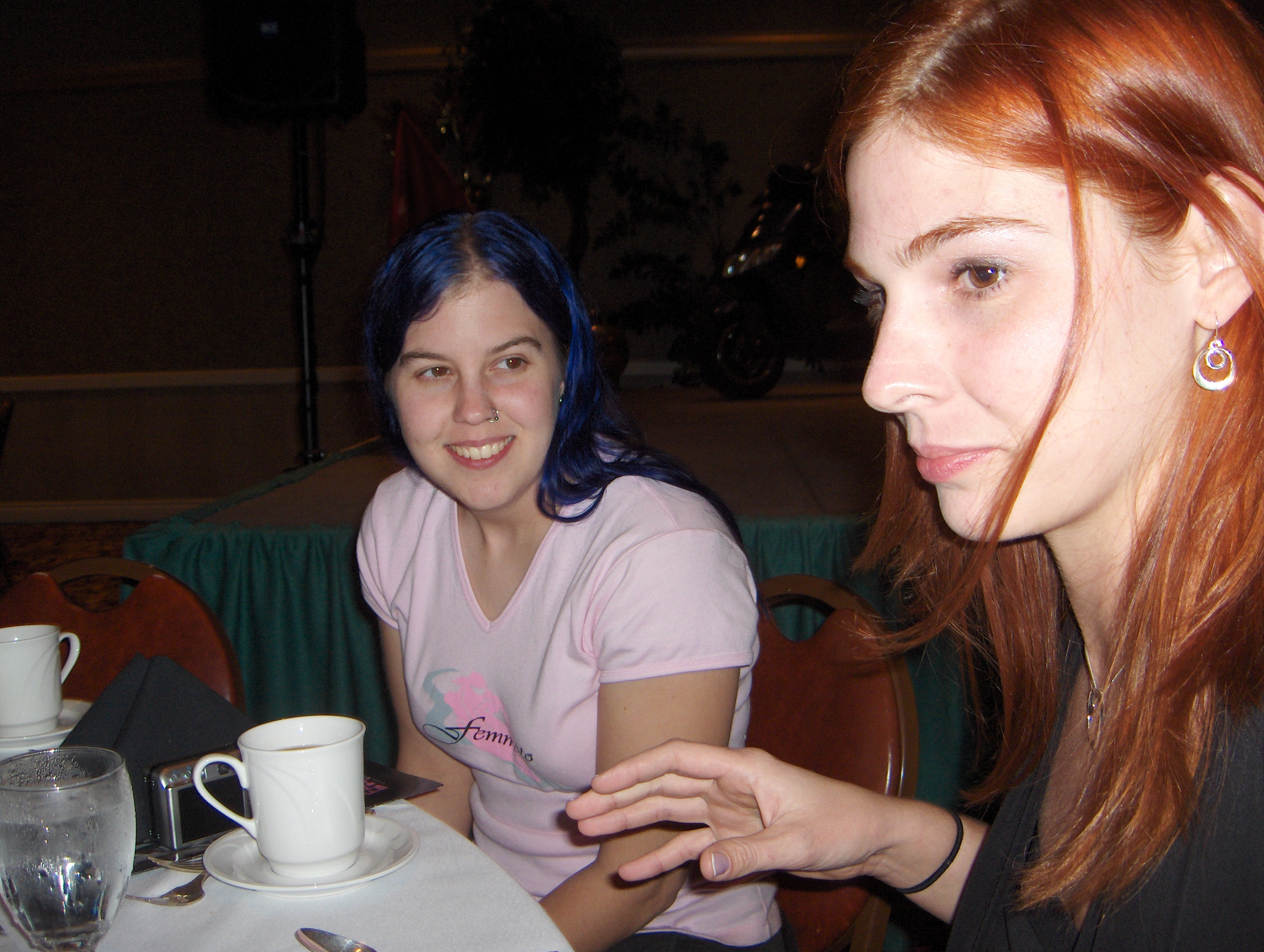 Afterward, I watched Carolyn, Yosh, and Jason play blackjack while attempting to keep my eyes open. We headed back to the room early; Yosh and Kristina needed to be up early to get to the track for the Sunday trackday.

This entry was posted in Trip Reports. Bookmark the permalink.

One Response to Femmoto 2006 – Saturday